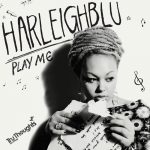 Hot on the heels of underground hit Enough Now, Tru Thoughts’ new signing Harleighblu has released the video for Play Me. It’s the first single from the 21-year-old’s debut album Forget Me Not, which is due this autumn.

Nottingham resident and hip-hop fan Joe Buhdha produced Play Me. The pair met when she was 17. “We seemed to knock out song after song at a crazy work rate,” says Harleighblu, who’s also based in Nottingham, “and I finally felt I was creating songs I wanted to create.” They’ve been collaborating ever since, Joe Buhdha being responsible for the single’s forthright beats.

Above is the Play Me video, which is out at the end of July. It’s set in a stately home, a far cry from Harleighblu’s Enough Now video, which was filmed in her local record store. She’s clearly moving up in the world.