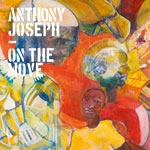 A Trinidadian poet with a doctorate in creative writing is not the typical CV of a recording artist, but urbane Parisienne label Heavenly Sweetness probably counts such erudite credentials as a plus.

Add to the mix UK saxophonist Jason Yarde and you have the makings of either a cerebral flop or a creative triumph. On The Move is the latter.

The song’s press release describes it as “somewhat chaotic” but that assessment draws the wrong conclusion. Anyone who’s familiar with Quite Sane, the group in which Jason was an integral member, will recognise that On The Move follows the award-winning band’s syncopated stylings.

Anthony’s words — a sort of stream of consciousness that encapsulates the vibrancy of the Caribbean — weaves in and out of punchy horns and jutting rhythms. It’s superb.

On The Move is taken from Anthony’s album People Of The Sun, which is scheduled for release on September 21, 2018.